How Migraine Symptoms Improved with Riboflavin, Magnesium and Q10 Supplementation

01
What is Migraine?
02
Natural Treatments for Migraine
03
The Study on Using Magnesium, Riboflavin, Q10 and Other Multivitamins for Migraines
04
The Results of the Study
05
The Conclusion
06
Reference

Migraine is a disorder in brain functioning caused by many things, like pain-sensitive parts of the brain being changed or chemicals called vasoactive peptides being released. People with migraines usually have headaches, which can be really bad and happen on only one side of the head. They can also be accompanied by other symptoms like nausea, sensitivity to light or noise, and phonophobia (fear of sound).

Acute (sudden and severe) attacks are treated with different medications. Some take preventive medicines such as beta-blockers, antiepileptics, and antidepressants to decrease the number and severity of migraine attacks, but all these have possibly harmful side effects.

Some who prefer natural treatment take Vitamin B2 (riboflavin), magnesium, and coenzyme Q10 as alternatives to drugs since these micronutrients have no or minor side effects. Magnesium is needed for various processes in the body like production of energy in the cells, vasoconstriction (or the tightening of muscles around the blood vessels), blood clotting, and secretion of the chemical serotonin that can influence migraine. Together with riboflavin and coenzyme Q10, these micronutrients might prevent or reduce the intensity of migraine attacks, especially if they are recurring, in those who cannot tolerate chemical drugs.

This study aimed to assess the effectiveness of the nutritional supplement Migravent® to the treatment of migraine.

The Study on Using Magnesium, Riboflavin, Q10 and Other Multivitamins for Migraines

Participants with at least three migraine attacks per month were randomly assigned into two groups. Of those who completed the trial, 55 took Migravent and 57 placebo. Investigators administered the Headache Impact Test (HIT-6) twice, before and after the three-month treatment period, to measure headaches’ effect on their ability to function. They also asked the participants to evaluate the tolerability and efficacy of the treatment after three months.

The Results of the Study

The supplement group experienced a significant reduction in the intensity of the headaches, a substantial decrease in the HIT-6 sum scores, and had a better evaluation of the efficacy of the treatment. 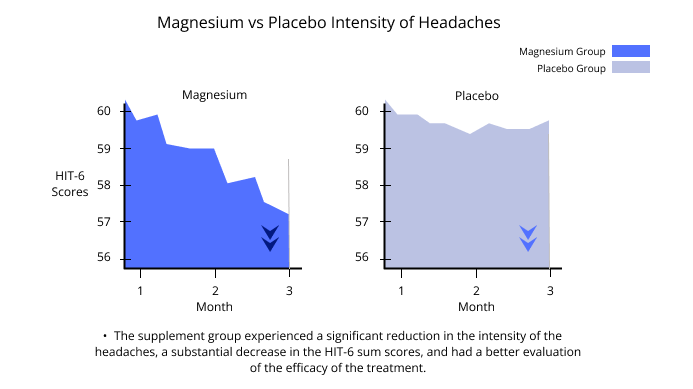 How Migraine Symptoms Improved with Riboflavin, Magnesium and Q10 Supplementation