The Risk of End-Stage Kidney Disease

Individuals with end-stage kidney disease (ESKD) have a much higher risk of succumbing to a heart attack than the general population, partly because the kidneys help control the calcium levels in the body. When there is a kidney problem, an abnormal calcium build up could occur in the blood vessels, making them stiff and more likely to burst. So, anything that can help keep calcium levels under control may help reduce the risk of heart attacks in people with ESKD.

The Effect of Magnesium on Serum Calcification Propensity (T50)

In this randomized, double-blind clinical trial, we tested whether increasing dialysate Mg from 1.0 to 2.0 milliequivalents per liter (mEq/L) for 28 days would increase the T50 of patients with ESKD undergoing maintenance hemodialysis (HD), and that T50 would return to baseline 14 days after returning to standard dialysate Mg. 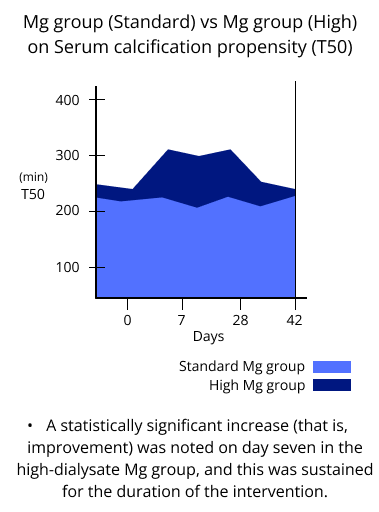 The increase in dialysate Mg from 1.0 to 2.0 mEq/L for 28 days significantly increased T50 in subjects with ESKD treated with HD. No incidences of serum Mg greater than 4.4 mg/dl occurred during the trial, and we did not consider any adverse events related to the intervention. Further study is needed to investigate whether increasing dialysate Mg improves clinical outcomes in patients with ESKD.