The Benefits in Taking Magnesium

Magnesium is a mineral that is found in many foods that plays an important role in the body.

Depression is a mental illness that affects 350 million people globally and is predicted to be the leading cause of disease by 2030. Antidepressant trials of sufficient dose and duration result in 50% of patients achieving relief. Even after the additional treatments, 20% still suffer from symptoms after 2 years.

Some research has shown that magnesium may help with depression symptoms in people who are deficient in this mineral.

The study on magnesium supplementation on mild to moderate depression

This study was designed to see if magnesium supplementation would help people with mild-to-moderate depression.

The study on magnesium was done in an academic medical center. 112 randomized participants were to take magnesium immediately or at the 7th week.

Participants were given four 500 mg tablets of MgCl2 (a dietary supplement) daily for a total of 248 mg of elemental magnesium per day.

The results of the study

Analysis on subgroups indicated that magnesium was effective regardless of age or gender. 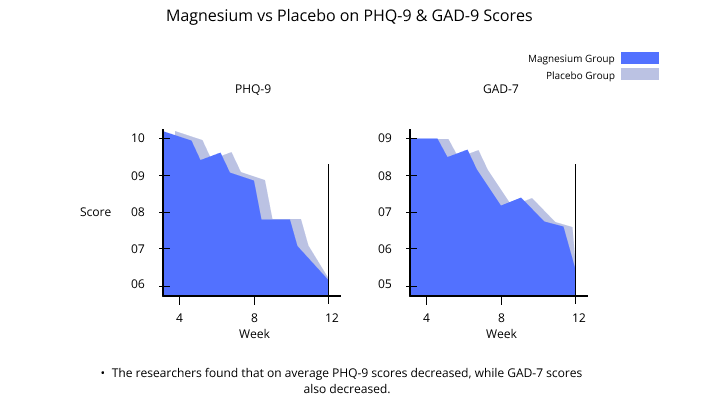 What are PHQ-9 and GAD-7 Tests

The GAD-7 is a 7-item scale that measures the severity of anxiety symptoms in the past week. The items are scored on a scale from 0 to 3, with higher scores indicating more severe symptoms.

Daily supplementation of 500 mg tablets of magnesium chloride per day might significantly decrease depression and anxiety symptoms regardless of age, gender, and baseline severity of depression.

While the cross-over design of this trial is robust in controlling internal biases, it would be reassuring to see the results replicated in larger clinical trials that test long-term efficacy and provide additional data on subgroups.

However, this trial showed that magnesium supplements might be a fast, safe, and easily accessible alternative to starting or increasing the dose of antidepressant medications.

Role of magnesium supplementation in the treatment of depression: A randomized clinical trial